It’s raining dollars in 2020 and seems no more gratifying like the unseasonal drizzles of Mumbai! Well, pleasant or not, who can halt Mother Nature and so the need for liquidity that is fulfilled by the US Fed. The dollar kept tumbling from nearly 104 high seen in March to near about 90.50 levels trading presently, thereby losing around 13 percent of its value. If considered in the short run, it has been over a week now that the dollar has been sustaining close to two and a half years low and within its crucial 91.50 mark. All of this is because of promised unlimited QE by the Fed, stimulus and expectation of further stimulus.

In our last report, we had suggested that it was a make or break for the dollar amid the overall trend remaining on the downside. As the dollar missed its last but not the least attempt to recover, here comes another stimulus as an ‘Iceberg to the sailing Titanic’, sinking the dollar along!

In the latest development, there has been an awaited agreement between the Republicans and Democrats for the $908 bipartisan COVID-19 relief plan and is set to be introduced in the US Congress for approval. The dollar, which has already been under selling pressure, shall have a challenging time ahead of the Fed’s policy meeting due to expectations that US interest rates will remain low for an extended period and the likelihood of the Fed expanding its bond-buying programme. This has raised concerns about rising government debt and increased liquidity, thereby exaggerating pressure on the dollar. Also, there has been a dollar sell-off due to being safe heaven amid the expectation of global recovery, distribution of Covid-19 vaccine that has lifted the market’s appetite pushing equities higher.

Considering overall fundamentals and the breakout out of crucial 91.50 marks, it is likely that the weakness in the Dollar shall be extended close to 88.50-88.70 levels in the medium to long run.

Well, all of the Dollar weakness has boded well for the rivals EUR and GBP, emerging them as rising stars of 2020!

The Euro, although remaining on an uptrend, kept shy of 1.200 levels as investors awaited the ECB’s stance on asset purchase and rising Euro. Well, as the markets heard what sounded like a melody to the ears from the ECB, the EUR got a needed trigger to move past 1.200 levels. Last week, the ECB expanded its debt purchase scheme under PEPP by 500 billion euros and agreed to provide banks with even more ultra-cheap liquidity to the companies, which boosted the Euro and investors shrugged off a Christmas lockdown in Germany.

Also, the hope of a Congressional breakthrough in the US stimulus has kept the EUR bulls in the lead, keeping the pair well above 1.200 levels and warranting the pair against any correction. As the overall weakness in the dollar remains sustainable, Euro bulls are likely to run at a faster pace as long as the pair trades above the 1.200 mark. Hence, the pair is likely to extend strength till 1.2450-1.2550 levels in the medium term.

With GBP, the sterling keeps glittering despite uncertainties hovering on the Brexit front. After having fallen to nearly one month low, the pair opened with a bullish gap after the UK and the EU agreed to extend Brexit talks. Boris Johnson and the president of the EU’s, Ursula, had given negotiators a Sunday deadline to find a way to resolve an impasse on arrangements that would guarantee UK zero-tariff and zero-quota access to the EU’s market. The call to continue negotiations beyond the deadline raised expectations for a free trade agreement before the end of the Brexit transition period on December 31 has boosted GBP above 1.33 levels.

Overall, as there has been limited progress in UK trade negotiations and that the UK and the EU have repeatedly failed to narrow their differences on key issues might hold the bulls in the short run. However, as the broader trend for GBP remains on the upside and any correction in the pair is supposed to be short-lived as long as the pair trades above 1.2850 levels. 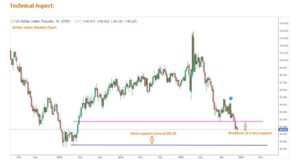 As seen above, there has been a breakout in the key support levels of DXY which was near 91.75 levels. As the key support has been taken out, the dollar index is likely to extend near 88.50-88.70 levels which were last seen in March 2018.

As there has been sustainability in the dollar weakness throughout 2020 and fundamentals and technical suggest further downside in the currency, the same shall be well translated on Euro and GBP despite either having none of its own inherent strength. Thus, it is quite likely that the dollar falls near to 88.50-88.70 levels could boost Euro and above 1.2450-1.2550 levels and 1.3550 levels respectively.