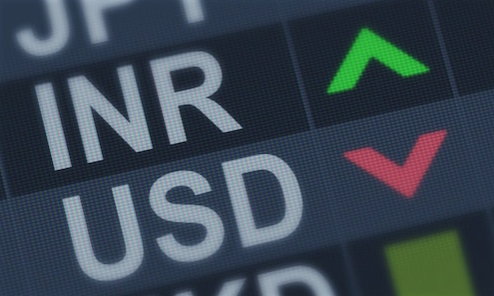 Since the RBI’s surprise rate hike by 40 basis points (bps), the rupee was seen tumbling against the US dollar.

Here’s why more pain may be on the cards for the rupee against the greenback over the short term.

Stronger dollar and US yields: The US dollar index jumped to a 20-year high after confirmation from the Fed that it will consider a 50 bps rate hike in June and July, and its plans to shrink its $9 trillion asset portfolio starting next month. However, the US central bank offered some comfort by saying that it is not “actively considering” raising interest rates in three-quarter percentage point increments. Higher US yields and relatively better economic conditions in the US support the dollar.

Weakening domestic fundamentals: As inflation in many parts of the world is at a multi-decade high, India will surely follow suit and price increases could worsen further. The trade deficit widened beyond $20 billion in April. Moreover, the ballooning current account deficit and the higher fiscal deficit would weigh on the rupee. Amid given the fundamentals, even the RBI has tapered down its growth forecast for the coming quarters.

FII’s withdrawal of money: Relentless selling by FIIs since the Fed’s announcement on bond tapering has exacerbated worries about market sustainability. However, DIIs along with mutual funds are absorbing the flow. But till what levels will the domestic investors be able to support Dalal Street against remains a big question.

Against the given backdrops, the positives stated below could be a ray of hope for the rupee:

RBI’s selling stance in forex market: The RBI’s forex reserves fell by more than $43.73 billion in the last eight months amid capital outflows and a strengthening dollar. Additionally, in the forward market, the central bank conducted two sell/buy swaps worth $5 billion each. This suggests the RBI will try to control the depreciating move regularly. However, it remains to be seen how they navigate with these figures in mind.

FDI inflows: FDI inflow in the financial year 2020-21 was a record $81.71 billion. It was $76.9 billion in the period from April 2021 to February 2022. Government agency PHD Chamber of Commerce and Industry (PHDCCI) is expecting a $100 billion FDI in 2022-23 supported by various economic reforms and ease of doing business. This could support the rupee from weakening against the dollar.

In a nutshell, deteriorating fundamentals have pressurised the RBI to allow the currency to depreciate. After giving up seven percent in the bond market, the rupee gave up the 77 mark. Weakness in emerging currencies against the US dollar, higher commodity prices and inflation, widening trade deficit on rising oil prices, rising COVID cases in China and a weakening yuan suggest the rupee will have to remain in a depreciating mode.

Overall, the rupee is likely to trade in a range of 76.50-78.50 with a depreciating bias over the next two months.