HomeNewsUncategorizedHistory in the making- Dollar index at 100!

History in the making- Dollar index at 100! 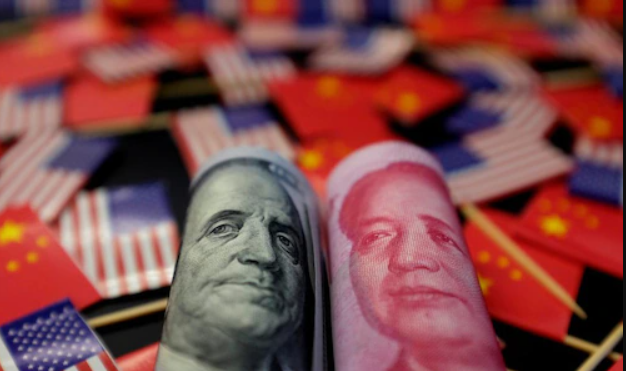 Greenback, or US dollar, was first created to finance the American civil war and were called as such because their backs were printed in green. In the modern world, where the US dollar trades as a safe-haven currency, there were days in the mid-1800s when Continental Congress did not have taxing authority and the “greenback” was a negative term because they did not have secure financial backing authority and banks were reluctant to give customers the full value of the dollar. But now, the US dollar is considered the world’s reserve currency.

The reserve status is based largely on the size and strength of the U.S. economy and the dominance of the US financial markets. Thus, when the US performs well, the US dollar appreciates. And during the time of financial crisis too, the world rush to buy dollar as the US would be least expected to default. The outlook on the US dollar index over the short and medium-term remains bullish. Let’s check factors that could take the index higher towards 100 mark, Euro towards 1.12 and Pound towards 1.32 levels over medium term.

Stronger case for US tapering and rate hike

After quantitative easing during the COVID pandemic and a round of stimulus package from the Joe Biden administration, the US growth has been back on the right track. The job market report has been slightly headwind in front of the policymaker but is expected to be normalized before the next year’s first-rate hike.

In the previous week, lower than expected preliminary GDP data weighed down on the DXY. But Friday PCE and core PCE data helped it to regain the ground up to 94.30 levels. The PCE Y/y basis rose to 4.4 percent – at the fastest pace since January 1991. Now, the rally across the US yield curve due to heightening inflation could pressurize on fed to go for a rate hike immediately after the end of tapering. Fed funds futures last week showed a more than 60 percent chance of a 25 basis-point rate tightening in June next year, fully pricing that scenario in September.

Futures traders also priced in two rate hikes before the end of 2022. The upcoming November 3 Fed’s meeting will be keenly watched. All in all, the US Dollar index is likely to make higher and highs and will continue its bullish rally towards 94.70-95.50 levels over the short term on the announcement of Tapering. If we check movement in DXY post-2013 Taper to the first-rate hike in Dec-2015 then it had posted a jump of almost 27 percent. This time we cannot expect the same jump but a target of Triple digit-100 over the medium term cannot be ruled out.

BoE ready to join Fed, but could turn into policy error

Amongst major DM central banks, the rate hike race is gaining attention day by day. The economic data has been mixed over the last one month- prelim GDP, Manufacturing PMI, and job report were seen beating the forecast. However, CPI and retail sales remained softer than expected. But BoE seems more concerning regarding soaring energy prices and their impact on future inflation. It is expected that the UK will continue to experience high and frequent peaks in electricity prices leading to further production stoppages, damages to plants, and long-term injury to the UK steel sector. Apart from steel, paper, glass, cement, ceramics, and chemical industries will be forced to close factories or pass on rising costs to consumers.

According to UK Steel, UK wholesale electricity prices surged from £50 per megawatt-hour in April to as much as £2,500 per megawatt-hour in September, which described the increase as “astronomical.” UK natural gas prices have increased by roughly 425 percent so far this year. In reaction to the market jittering, UK gilt- 10-year bond yield jumped from 0.50 percent at the start of August to 1.20 percent in Mid Oct. In November 4 BoE policy, some shaky moves can be expected in the GBPUSD pair as few participants are expecting a pre-attempting move from BoE.

But rapid and aggressive hikes could be a big mistake from BoE and could lead to policy error as this will not going to support the growth. And eventually, they will have to reverse back. That apart, overly stretched topic- Brexit (Northern Ireland Protocol) is still unresolved and likely to add further worries over the business outlook. Broadly, a rate hike could be negative for the Pound as rising borrowing costs will have a negative impact on their business activity. All in all, UK’s weakening fundamental is US dollar supportive.

ECB into deep dilemma between ‘Hawkish’ and ‘Dovish’ stance

The EURUSD pair was seen hitting a low of 1.1520 levels last month amid sluggish domestic fundamentals and due to a rise of a bullish dollar empire. On the data front, German business confidence fell for the straight fourth month with the IFO business climate index slipping to 97.7. This deterioration is consistent with weakness in PMIs, industrial production, and ZEW. Germany is already feeling the strain of supply-chain bottlenecks and its top economic institutes just cut their joint forecast for 2021 growth to 2.4 percent from 3.7 percent. If we look at current Eurozone inflation, then it is at 3.4 percent, is at its highest level since 2008, and is expected to approach 4 percent by year-end. On the political front, the Germany is yet to form its government. And that could be threat for the Euro until new chair person is elected.

In recent ECB policy meet, ECB left monetary policy unchanged, but unlike their global counterparts, they are less worried about inflation. ECB President Lagarde said that “We did a lot of soul searching to test our analysis and we are confident” that the surge in inflation will prove temporary, though “it will take a bit longer than expected.” She also pushed back on the market’s expectations for an interest rate increase next year. Overall, a sluggish Eurozone outlook could allow the US dollar to lead the stage and make the bullish story stronger.

The fed is always known for its better communication. They have perfectly prepared the market for tapering and likely upcoming rate hikes. The market has started discounting June and Sep 2022 rate hikes. US Yields are also soaring and the curve has started flattening. This all suggests bullish bets for the US DXY. Hence, we are expecting that the dollar index should steadily inch higher towards 95.50 over the next one month and 100 mark over the next 4 to 6 months’ time horizon.

Whereas, BoE with no option left, will act very aggressively and go for a hike before Fed. But the energy crisis and Brexit concerns could not allow it to move beyond the 1.3900-1.3950 zone. Hence, we are expecting the GBPUSD pair should make a reversal from the current level and move towards 1.3420 over the short term and 1.3200 levels over the medium term.

The bearish case for the EURUSD pair looks more promising as ECB cannot even think of a hike amid struggling economic activities. Hence, bounce is likely to remain capped under 1.1700-1.1750 levels and it could move steadily lower towards 1.1300 – 1.1200 levels over the next 4 to 6 months’ time horizon.