HomeNewsUncategorizedView: Rupee may be headed to 80.5 vs US dollar in 2-4 months  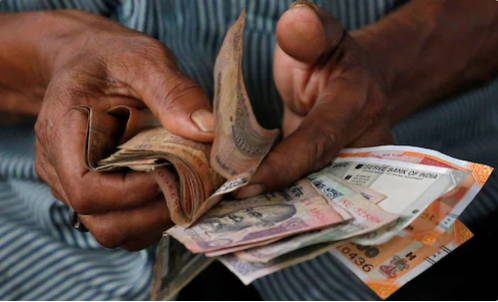 The rupee is no more an outperforming currency after hitting a series of record lows against the US dollar, which took it close to the average depreciation of 6.75 percent in Asian currencies. In the Asian pack, it posted the worst quarter since Asian Crisis of 1997 amid increasing worries about aggressive tightening by the Fed and the rising risk of a global recession.

This led investors to withdraw from their riskier assets and seek safety towards the safe-haven dollar.

Tapering, aggressive rate hikes and quantitative tightening by the Fed have dented FIIs’ mood for Indian stocks and bonds. Since October 2021, they have sold Rs 2.67 lakh crore worth of Indian equities and bonds. In June alone, selling stood at a net Rs 50,000 crore — the second largest monthly withdrawal since 1999.

Higher oil import costs and a widening current account deficit of $23-24 billion have resulted in a huge dollar shortage in the market. The RBI, however, is trying to meet the demand through its reserves and churning position in the forwards book.

As long as FIIs withdrawal and the higher deficit do not halt, it would be difficult to meet daily dollar requirements for the RBI — which means the rupee could remain under pressure.

The sentiment for the rupee has been so negative that the RBI has to spend extra dollars to give hints that it is active and central banks want to manage the currency well. Unless some $8-10 billion will not be pushed into the market, the rupee may keep on depreciating.

The bullishness in the US dollar index is still on as a faster rate hike by the Fed resulted into higher US yields. A rising yield differential goes in favour of the dollar. The ongoing Russia-Ukraine war and the western capping of Russian oil prices could be another factor for the risk-off sentiment in the financial market and non-supportive for the rupee.

On the other hand, a tighter market and a failure of the OPEC to balance the global market will keep supporting oil prices around the $100 a barrel mark in the near term.

The record amount of foreign investors’ outflow from Asian markets amid the tightening external financial situation and rising inflation has weighed down on the currency value. In case of India, the RBI tried to curb the situation by providing dollars, mitigating the shortages but that temporarily halted the fall in the currency.

We believe the RBI’s intervention may not be able to turn the pessimistic sentiment that easily. If the situation persists over the short and medium term, there could be further depreciation of 2-2.5 percent.

With some short breathers, the Indian rupee could steadily depreciate towards 80-80.5 levels over the next two to four months. On the other hand, levels of 78.4 and 77.8 will be crucial to watch for a reversal.