HomeNewsMarketUS Elections 2020: Here’s how equity markets will react to Trump or Biden win

US Elections 2020: Here’s how equity markets will react to Trump or Biden win As we are heading to the most awaited event of the year, volatility can be back with firecrackers in the equity markets anytime soon. In the last week, we saw a sharp decline in all the indices across the globe where Nifty had fallen by nearly 2.5 percent, major European indices have fallen by more than 2 percent to 3 percent and US indices by nearly 1 percent. All of it was triggered by the imposition of fresh lockdowns and curfews in various parts of the EU and the UK.

Presently the markets have tried to recover from that anticipated shock and have wiped off maximum losses of last week amid renews optimism. Well, will this be the scenario 15 days ahead of the election and post that too? For sure, the coming days will bring in a dash of volatility and drama.

So far since the massive fall of equity in March where US Dow Jones had declined nearly by 38 percent, the index so far has shown a significant recovery and has reached pre-COVID levels. A major push that survived the equity market throughout was the support given by the US Fed and government in the form of providing massive stimulus to hold the economy from the fallout.

In March this year, President Trump signed into law the CARES Act, a stimulus bill totaling more than $2.3 trillion, to provide relief to individuals, families, small businesses, and industries impacted by the economic slowdown caused by the coronavirus pandemic. The announcement of stimulus turned out to be a game-changer for the equity market and immediately a significant recovery was seen. This was followed by the $484 Billion ‘Interim’ CARES Act along with the Federal Reserve’s Emergency Initiatives that included a slew of emergency initiatives enacted by the Fed including rate cuts, lending programs, and credit facilities etc. In all, the programs could combine to provide more than $6 trillion of liquidity to the financial and business system by the US government and Federal Reserve, eventually leading to a sharp recovery in the equity market.

However, let us understand the story on the other side of US elections for Equity markets and see how they react to the outcome. The above graphical presentation shows what would be the possibility of the outcome of US election and its impact on the markets.

Will Trump win drive the markets up or Biden would?

Well, in our observation, over the past 3 decades, US elections have been conducted 8 times and surprisingly, equity markets have the majority of the time cheered the outcome irrespective of whichever party or president comes in power.

As seen above, the only time the equity markets had fallen 3 months and 6 months after the election was in 2008 due to the subprime crises. And in 2001, which is exactly after 1 year of the US election, markets had fallen due to the US terrorist attacks on WTC. The rest of the time, markets have cheered the outcome and the one-year gains have been at an average gain of more than 15 percent. So as the trend suggests, the likelihood of equity markets to fly is higher irrespective of Trump or Biden be in power.

Also this time, Trump is promising a bigger stimulus package than Biden. His latest proposal offered is worth $1.8 trillion and Appeals to Congress to pass targeted relief aid for struggling airlines and small businesses as well as another round of $1,200 stimulus cheques for individuals offering.

On the other end, Biden’s campaign calls the $1,200 stimulus checks (plus an additional $500 per child) that millions of Americans received under the CARES Act, and extending unemployment benefits $600 a week. Also, offers a weaver of a minimum of $10,000 in federal student loans for each borrower and increasing Social Security checks by $200 a month including 64 million retired workers. In all, Biden has published a subsequent stimulus package that could cost another $3 trillion.

As both, Trump and Biden are promising bigger stimulus than each other, one thing can be certainly concluded that the equity markets will get another reason to rise.

So what does it mean for the Indian Indices? 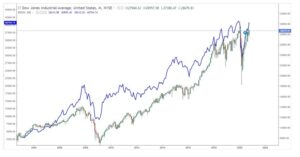 As seen in the above overlay chart of US Dow Jones and Sensex, the historical pattern suggests that both share a positive co-relation. That is if one rises, the other does and vice versa. Both Trump and Biden have promised bigger stimulus, irrespective of who wins, the announcement of it will lead to a boost in the US stock markets. Since both the indices are positively correlated, Indian markets too shall remain on an upward trend supported by global sentiments. Hence, in the medium to long run, there are prospects of money flowing into the Indian Capital markets post-election.

Therefore, any dip between in Nifty 10,550-11,050 can be taken as a buying opportunity with an objective to hold for medium to long term.