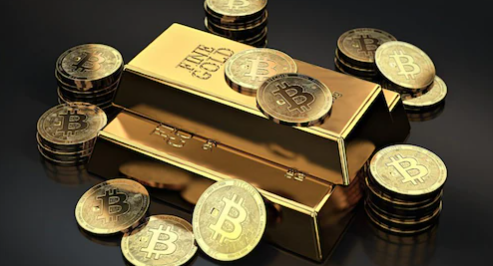 “Gold is forever. It is beautiful, useful, and never wears out. Small wonder that gold has been prized over all else, in all ages, as a store of value that will survive the travails of life and the ravages of time.” — James Blakeley

Gold and other precious metals have long been a store of wealth for mankind—from the most ancient civilizations to the modern-day. And throughout the centuries, lots and lots of people have talked about it. That is visible, as the world’s central banks and the International Monetary Fund still have vaults full of bullion, even though currencies are no longer backed by gold. Governments hold on to it as a kind of magic symbol, a way of reassuring people that their money is real.

Bullion has always been touted as an inflation hedge. And the recent concerns over broadening inflationary risks have kept the bullion’s safe-haven appeal intact. Let’s analyze some technical factors that could push the price of the precious metal up further:

Under grounded US Real yields:

The real interest rate is an interest rate that has been adjusted to remove the effects of inflation and this reflects the real cost of funds to the borrower and the real yield to the lender or an investor. Gold has a strong inverse relationship with the U.S. real interest rate, which has resumed its slide into negative territory since March. The correlation between real interest rates and the price of gold is approximately -0.80. In other words, when real yields go down gold goes up. This correlation explains why inflation is gold’s best friend while rate hikes are its worst enemy and that signals gold prices are undervalued for the current level of yield. Thus, yellow metal shall continue enjoying upward momentum as lower real interest rates are lingering.

The Fed’s announcement for the start of asset purchases has been dampened by signals of delay in rate hikes. This means that as long as nominal yield doesn’t bit inflation expectations the real yield is likely to remain negative and that would favor gold to be on the cusp of recapturing the $1900 levels.

Festive and marriage demand in Asia could tie a knot

The US and Europe witnessed mostly net outflows throughout this year due to Fed tapering announcements and heightened expectations of interest rate hikes. However, in the Asian belt, Gold exchange-traded funds (ETFs) continued to attract investor attention as they garnered net assets worth Rs 303 crore in October amid festivals, Chinese New Year, gift-giving, and the beginning of marriage season thereby keeping the metal demand intact.

According to the report, China’s ETF holdings were on the rise due to their weaker economic data and mild equity market performance post EverGrande issue. While in India, heightened volatility in equities on account of inflows and a correction in the domestic gold price drove holdings in Indian gold ETFs. In fact, demand for physical gold was seen more encouraging, with China imports averaging 25t against 10t last year. The premium for physical gold recovered in both in China and India, unlike developed countries.

Gold ETF holdings witnessed inflows as holdings at SPDR Gold Shares added to 976 tonnes (the highest level since June-2021). Though, gold had declined in early November, with the nearby December COMEX futures contract reaching low at $1758.50 ahead of the Fed policy meeting. However post ‘Transitory’ word took place again in Fed’s meeting, gold has moved consistently higher. And it rose above a critical technical resistance level at the mid-July $1839 high after US inflation jumped to an annual rate of 6.2% in October, the highest since December 1990 and with expectations to rise further.

Speculators rushed into gold futures as real yields dropped and the dollar softened after a slight pullback in the US inflation expectations and mixed comments over the Fed rate hike weighed on the market sentiment and dragged the US dollar down to 95.73 levels. The CFTC disaggregated Commitments of Traders report showed money managers increased their speculative gross long positions in Comex gold futures by 31,189 contracts to 168,133.

At the same time, short positions dropped by 9,182 contracts to 41,523. In other words, the 48 percent jump in the net long to a 10-month high at 146k lots occurred before the price broke key resistance at $1835. The subsequent rally to the current level around $1870 has undoubtedly resulted in more length being added, and with the dollar still wandering and yields showing unclear signs of pushing up back.

However, the only headwind for the yellow metal could be as below:

While gold has performed very well as an inflation hedge in the last decade and a half, a modest tightening of the Fed’s monetary policy stance will drag real Treasury yields a bit higher. Investors assume that higher inflation will go hand in hand with the central bank tightening monetary policy keeping the dollar strong and the bullion under pressure.

The below weekly chart of the international spot gold suggests that the prices have moved out from a congestion zone or a triangle kind of a zone. It has given a clear breakout above $1832 levels. And now it is heading towards its resistance of $1915 levels. If that is taken out then one can expect further upside move towards $1960 levels. Any correction towards $1832 will be an opportunity to go long on gold. Further, support lies at $1790 and $1760 levels that seem far from testing over the short or medium term.

In summary, market participants will remain focused on inflation and what it means for major central banks’ policy outlook in the near term. Comments from FOMC policymakers will be key in determining whether the Fed will prioritize controlling inflation over supporting the economy. Gold should keep its status as a “desired asset” in the face of undesired inflation and shall move towards its resistance zone of $1915 levels with a steady upside bias, until the dollar bulls return to the market.