HomeNewsCommoditiesWhat do you expect from dollar, rupee on 30th anniversary of liberalization?

What do you expect from dollar, rupee on 30th anniversary of liberalization?

The 30th anniversary of the economic liberalization surely deserves celebration as those reforms helped the economy stave off a crisis and then started to materialize the impact by the first decade of the 21st century. The opening up of the economy led India to be on a list of the fastest-growing emerging market.

The clustering point which created a dire situation back in 1990 was firstly the twin deficit issue- trade balance was in deficit at the time when the government was running in a huge fiscal deficit and reserves could barely finance three weeks of imports. There was no support from either FDI or sensitive flows like FII/FPI at that time.

Further, break up with the Russian bloc with which India had rupee exchange, and then Gulf-war worsened the situation to the level where the government came close to defaulting on its financial obligations. The rating agency Moody’s downgraded India’s rating to Baa3. To avoid default on external payments India had no option except to mortgage the country’s gold as World Bank and IMF denied assisting.

Amidst that, the government collapsed and the assassination of Rajiv Gandhi led to the election of a new government directed by P.V. Narasimha Rao. On 24th July 1991 our Finance Minister- Manmohan Singh presented the budget along with an outline for the reforms, broadly known as “Economic Liberalisationof India” and then RBI formed Narasimham Committee to recommend changes to the financial system. The results were remarkable as India was seen back on the track with steady FDI/FPI flows, higher GDP, and per capita income. By 2006, India became the second-fastest-growing major economy in the world, next only to China with 9.6 percent of GDP. 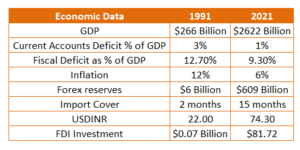 Let’s discuss the situation in 2021, exactly after 30 years of liberalization. This time, the COVID-led pandemic has worsened the situation again, but not like 1991 where our forex reserves are depleted and we had to take help from IMF and World bank. The reserves kitty worth more than $600 billion is enough to support import of 15 months, although compared to nations like Switzerland, Japan, Russia, or China it is still below their levels. However, other economic data such as GDP- fell by 7.3 percent in FY 21, per capita GDP also declined along with higher unemployment and disruption of the smaller businesses due to lockdown.

But the same was observed across emerging markets and some parts of the developed markets too. For the revival of the business activity and support lower-income groups by way of direct food rationing, the government expanded their fiscal plans without any second thought up to 9.3 percent in FY 21 and will have a deficit of up to 6.8 percent in FY22. It has been observed that over the last 4 years India has missed their fiscal deficit target and spend more than planned for the growth. This time fiscal slippage will be observed or we could see a Twin-deficit issue as well.

But there are few headwinds in front of the Indian economy and it is exposed to some external vulnerability as mentioned below.

Currently, the crude oil prices have broken $75 a barrel mark to trade near a three-year high up by more than 50 percent since the start of this year, guided by optimistic demand outlook after speedy vaccination in the developed market and easy central banker’s liquidity stance. Further, delay in the decision over US-Iran nuclear deal has supported the steady output levels. Now, onto that clash between UAE and Saudi on easing output cut in extended OPEC+ meet has been called off without any decision and with no new dates for the meeting. This has directed oil prices to move further higher as an increase in output from August to December 2021 will not take place. This will surely pressurize on the oil-importing nations such as India and on currency too.

The “Joe-Jerome” pair-led growth along with demand-pull inflation could force-fed to “think on tapering” sooner than later. The recent activity from the Fed in the Overnight Reverse Repo market to support short-term rates suggests that the Fed is on course to lift off its support line. The expectations are building up for the announcement of tapering in Jackson-Hole. The yield curve has started to flatten out on that expectation and the dollar index has boarded the flight towards 93.50-94.30 levels. 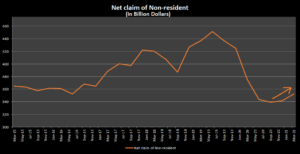 The net claims of non-residents on India have increased by US$ 11.2 billion to US$ 352.7 billion in March 2021 during Q4 FY21. The major contributor for the rise in liability is inward portfolio investments and loans along with depreciating currency, which accounted for the change in the liability. Broadly, one can say that the net claims of the non-resident is turning higher from $339.1 billion at the end of September 2020 to $352.7 billion in March 2021.

Apart from external shocks, after two lockdowns within a span of 1.25 years, India will not be able to afford another stricter lockdown or rising cases. For that, India has to speed up their vaccination drive to limit the impact of the contagious variant.

In nutshell, after 30 years of liberalization India is again facing some hurdles due to the COVID pandemic. But the situation is far better than 1991. Some hiccups in currency can be seen on account of soaring crude oil prices, hawkish fed, higher India’s fiscal deficit and other sluggish domestic fundamentals. But broadly, we will not see a sharp depreciating move in the currency as RBI has enough reserves and forward book to curb the losses on timely basis. However, in the second half of the calendar year-2021, we are expecting that the rupee will slowly depreciate towards 75.50-76.00 levels on broad dollar strength. On the lower side, definitely 72.50-73.00 zone will be medium to long term base for the pair.