Is rupee’s silence hinting at an upcoming storm? Contrasting the claims made by the finance minister, the double whammy from inflation and industrial growth data suggests that India’s economy is far from a recovery in the near future. Industry in December contracted by 0.3 percent, manufacturing contracted by 1.2 percent, capital goods by 18 percent, consumer durables by 6.7 percent and consumer non-durables by 3.7 percent.

On the other hand, headline inflation print at 7.59 was at a six-year high with food inflation stays at close to 14 percent and it was the second consecutive month when real rates are negative.

Well, does this look like merely onion-driven inflation? Last month, it was expected that the prints for January would have mellowed down a bit as ‘onion prices’ have relaxed. The message from these numbers needs to be digested that it is much broader food inflation than just onion.

Talking about core inflation for January, which doesn’t include food and energy prices, it also has inched up to 4.2 percent, which is above the 4-percent mark mandated by the RBI’s framework.

The RBI can’t reduce rates to boost demand as inflation is at a peak. Even as the RBI makes it cheaper for banks to lend, projections suggest inflation will remain nearly equal if not exceed the fixed deposit rates. Hence, real return from these savings instrument will suffer and may even turn zero or negative. A depositor faced with negative real interest rates may react by saving less in the banks. High inflation at a time of contracting growth cannot go hand in hand as coexistence of the two, even for a quarter or two, can seriously reduce options to boost growth and would endanger financial stability.

Also, January and February data may show the strain of China-related supply chain shortages as we can already see the Chinese shutdown has hampered domestic exports and imports up to some extent. And this external slowdown pressure may be exacerbated by the steep fall in transfers to states this quarter.

However, the bond and FX market didn’t react much, as the number was already priced in. But if looked from growth-inflation dynamics, which determines the currency attractiveness, it is not looking favourable for Indian rupee as inflation is likely to remain elevated over the next few months. As large moves in rupee are generally originated from global trends, the market has so far ignored the virus risk and its economic impact on China and the global supply chain. This was mainly because the pair was tightly controlled between the RBI and market participants. But the same cannot be ruled out if China allows its currency to weaken beyond the seven yuan to the dollar mark. If something goes off track in global markets due to geopolitics or viruses, we can face a sharp attack on our exchange rate too. 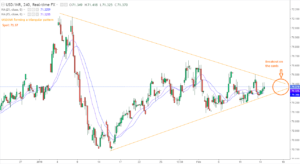 As seen above, the rupee has made a triangular pattern and the range of the pair is getting compressed as it is constantly making lower highs and higher lows. This is led by a reduction in the volumes in Indian rupee due to which the pair is lacking momentum. Volumes are reduced as the market is awaiting cues to take long bets. Inflows in capital markets are absorbed by the RBI to build reserves due to which selling pressure exerted by market participants is neutralized thereby the pair in a compact range. As a result, we see USDINR opening down with a gap and within the day the RBI is gradually lifting the pair up.

The rupee is stuck between two giants keeping it vulnerable — central bank on bid and market on offer. Let’s see who blinks first. This narrowing of the range is alarming as longer the pair remains range bound, the sharper would be a breakout. Given the above fundamentals, there is a 65-75 percent possibility that the breakout will be on the upside of the range 71.10-71.50 targeting levels close to 71.80. However, the view gets void if the pair closes below 71.20 in a successful way.