HomeNewsCurrencyIs the dollar strength inherent or is merely supported by euro and pound weakness?

Is the dollar strength inherent or is merely supported by euro and pound weakness? In the last couple of sessions, the US Dollar is back in the light and taking its march forward towards strength. The dollar touched a three-week high as renewed worries about the second wave of coronavirus infections sent investors into safer assets. The dollar index began its upward rally, after the US FOMC meeting which lacked any additional stimulus from the Fed. Risk-aversion was seen throughout, not because the Fed has been extremely dovish, but policymakers indicated unprecedented levels of uncertainty over the economic future.

In this scenario, the dollar also got to recover against its high-yielding rivals like the euro (EUR) and pound (GBP). Also, profit-taking on risker stocks and worries about the second wave of coronavirus cases gave a boost to the US currency.

But, what is the way going forward for the dollar index? Is the strength in dollar merely as a result of potential weakness in the major rivals euro and pound?

Let us glance through the fundamentals of the Euro-zone and UK and reasons why there can be weaknesses seen in the EUR and GBP?

The European Central Bank (ECB) recently unveiled a plan of 750 billion euros to help European countries manage the setback caused by COVID-19. As per the recent developments, more stimulus is likely, although the EU leaders failed to agree on a 750 billion euros recovery fund for the coronavirus crisis last week. This was widely expected given several northern European nations had voiced their opposition to the plan to pay out the majority of this stimulus in grants instead of loans that has divided the countries bitterly for weeks. No progress on stimulus coupled with Lagarde’s warning of a dramatic economic fall has spooked the investors and the negative impact could be seen on EUR. Also, the Euro-zone problems are deep and real which shall not let the euro-dollar pair to sustain strength for a longer time.

The Euro debt crisis: It has led to a loss of confidence in European businesses and economies. Higher than expected deficit levels eroded investor confidence causing bond spreads to rise to unsustainable levels. Fears quickly spread that the fiscal positions and debt levels of a number of Eurozone countries were unsustainable. Therefore, rating agencies downgraded several Eurozone countries’ debts, thereby putting the currency under pressure.

Brexit: In reality, a lot of migration of resources like human, physical, financial happens from the EU to UK or Germany. With the UK to leave the EU, apparently to end the flow of migrants into its economy, the EU has already begun to disintegrate. Also, trade surplus originating mostly from German exports is led by the flow of funds into the euro area. With Germany falling into crises, this flow of funds shall be halted thereby adding pressure to the EUR.

Rise in populism: With the rise of populist parties across Europe, it is quite clear that the next major crisis would constitute a threat to the EU. The rise of populist nationalists swept to break the old political establishment, reverse the tide of globalization, and do more to put their countries first. Since the Eurozone has its share of economic and political issues, speculation takes its toll on the currency.

The pound-dollar pair was seen rallying as risk sentiment had returned with many economies opening up. In the past few months, the GBP has been quite a vulnerable currency. Rallying when its risk-on and falling when its risk-off. The sentiment, whether positive or negative, is a key driver that generally runs throughout financial markets.The recent fall in the GBP could be accounted by below-mentioned factors:

Negotiation on Brexit date: GBP began to fall after British officials told their EU counterparts; they will not extend the deadline for trade talks beyond the end of this year. Boris Johnson will draw out a new plan this week aimed at unblocking talks on Britain’s future relationship with the EU which is likely to have intensified negotiations starting on June 29. Brexit strategy cabinet committee will discuss areas for possible compromise this week, including the idea that Britain would reserve the right to diverge from EU standards considering that it would be hit by tariffs if it did so. EU governments will also adopt a statement on the next stage of talks.

BOE Monetary Policy: The BOE Governor Andrew Bailey signaled a major shift in the central bank’s strategy for removing emergency stimulus, stressing the need to reduce the institution’s balance sheet before hiking interest rates. The BOE’s balance sheet has soared to almost $864 billion with debt to GDP ratio rising above 100%. This is because of its extraordinary measures during the coronavirus pandemic and the same is set to grow much larger because of the central bank’s bond-buying program. He warned that elevated balance sheets could limit the room for action in future emergencies. The governor didn’t mention negative interest rates or yield curve control but said all policy tools are still on the table and that the bank would review the impact of sub-zero borrowing costs.

All in all, as the risk-off mode is back in place, the US dollar is likely to keep move towards the stronger side as it is viewed as a safe-haven currency and not caused by any positive fundamental change in the US economy. 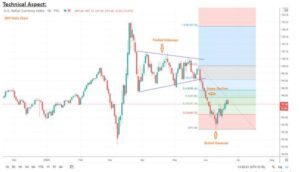 As seen above, after have traded sideways for about two months, the Dollar index had fallen sharply near 95.50 levels. However, in the past few trading sessions, the pair has bounced back after taking support near 95.50 levels, indicating a sharp reversal in the price action. Currently, it is trading near 50 percent retracement levels at 97.40 levels, if the dollar index continues its upward march, we shall see it rising near 98.50-100 levels.